What is the purpose of an airbox on a motorcycle?

Although as riders we are all unique, there are some traits we all share, amongst them, the innocence of our first year(s) on a bike.

Many of us get our licenses, choose a bike, and immediately start thinking on how to improve it.

Friends, forums, Youtube videos, the world showers us with information on how we can get more out of our bikes.

Exhaust cans and lines, PowerCommanders, different spark plugs, new air-filters, the options are endless, and our understanding of them, usually scarce.

Although for some reason we want more out of a bike we can barely control as is, either for budget reasons or because of that little voice that reminds us that we don't know much about mechanics, we tend to start small.

Exhaust replacements and high flow filters or airbox removals are usually the first steps for many, and there is not anything necessarily wrong with that, but it is important to debate this topic further, especially when airboxes are on the table.

So why are airboxes important on a motorcycle? What purpose do they actually serve?

This answer can turn very geeky and very complicated very fast, but with a simple explanation, it is possible to give you enough information for you to be able to impress your friends next time the subject comes up.

To give you that info, we need to follow the history and evolution of airboxes.

They were pretty much just a box where your air filter would be stored away from the elements and debris.

Imagine a Tupperware with an air filter inside, an inlet for the box, and an outlet for the engine, as simple as that.

Understanding this simple design allows us to see why removing the airboxes and going with high flow filters provided significant power gains, as it reduced the airflow resistance the boxes created.

That airflow restriction usually made the bikes run far from their full potential.

By removing the airbox and adjusting the fuel you would easily get more air and fuel in, a bigger bang, and of course, more power.

On the downside, as you now have an air filter out in the elements, you will need to tighten your filter maintenance intervals. 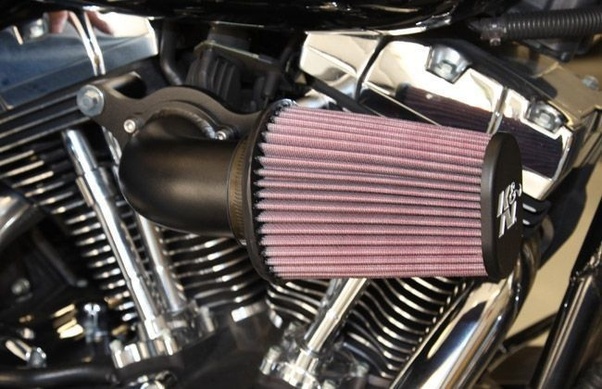 Around the late 1980s, a new kind of airboxes started to show up, and those were designed differently.

Those airboxes, using very well crafted math, based on fluid mechanics, allow air to resonate, or fluctuate between high and low pressures timed with the stroke of the engine.

The idea is that when the piston goes down, it sucks the air out of the box, leaving a low pressure there.

If everything is working correctly, there should be a hum inside the airbox, or in other words, a resonance effect.

Engines started then being designed to work at their best at specific RPM ranges, which is one of the reasons why some bikes work better in some RPMs than they do in others.

Have you ever tried to cruise around 2.000 RPM's on a 600cc superbike just to find out it rattles and gasps like crazy as opposed to when you are riding at 7 or 8.000?

That is because the specific RPM of that speed craving bike is set higher for obvious reasons.

Jumping to today, we see a new upgrade to the airbox, or more precisely, to the tubes between the airbox and the engine.

By moving those tubes up or down, you can change the resonance of the box, and as such, you can achieve optimal resonance for different RPM’s.

Try blowing air into a beer bottle with different amounts of beer inside.

Each time you blow with different amounts of beer inside, you will produce a different resonance, or in other words, a different sound.

Controlling this effect produces bikes that perform at their best at different RPM’s.

And how do manufacturers control this effect?

This may be a difficult concept to visualize, so a little visual aid may be in order.

It is not a brilliant video, but it will give you a clear idea of what I’m talking about.

There is much more to be said about this, and obviously, my answer is an oversimplified explanation of a very complex subject.

This tells us that removing airboxes in new bikes and changing them for open filters will actually make us loose performance, as opposed to what happens in classical bikes where the improvements of that upgrade can be high.

Knowing that removing airboxes can be jeopardizing to our bike's performance, doesn't mean that changing the OEM air filters to high-flow ones will have the same bad results.

More air will mean more oxygen, and of course, a bigger bang that will produce more power, but if you plan on making that change, you need to take one extra step.

With the bikes of today extremely well-engineered, the bike knows exactly how much fuel it should pump considering the amount of air is getting in.

When we change the OEM air-filter to a high flow one, we are, as the name entails, pushing more air into the engine.

Modern onboard computers have the ability to understand that more air is coming in, and as such, will pump more fuel to compensate, however, we don't know how far the onboard computer can go.

Let's assume that from stock your bike has 10 unites of air flowing through the airbox and that your new high-flow air-filter allows your bike to push 15 units of air.

If your onboard computer can compensate 7 additional unites, you are golden, if it can only cope with 3, you are effectively paying to reduce the performance of your bike.

The same can be said regarding exhaust lines and cans.

Since there is no way for us to know how much our onboard computers can deal with, if you are planning on changing the air-filters, air-boxes, or exhausts, budget for a trip to the dyno.

There, you will be able to readjust your entire system and take full advantage of your bike, and of the investment you made in after-market parts.

Don't be fooled by marketing or by that friend that swears his bike is the fastest and most powerful rocket on the road because of a 20$ air-filter and a can he got on eBay that he fitted the night before.

Be smart, do your research, and don't pay to reduce the performance of your bike.